In the run up to the general election Ive been reading various articles about the housing manifestos for each party and what affect they might have on the property market. Whatever the politicians throw at it though, the property market in Chichester is something of a runaway train, whereby their meddling has little effect on the overall course.

Its often mentioned in the press that the uncertainty caused by an election causes a downturn in property sales in the lead up to the opening of the voting booths. My analysis shows this to be completely untrue though, as the normal seasonal pattern occurs whether its an election year or not; the number of properties sold rises in Spring and Summer and drops again towards the end of the year (almost stalling as we approach Christmas).

Theres little effect upon house prices in the run up to an election or straight afterwards either, with perhaps the exception of May 2015s election. Here there was a sudden jump in the average house price in Chichester immediately afterwards, possibly because the electorate gave the Conservatives an unexpected majority, which many concluded would be good for the stability of the country. 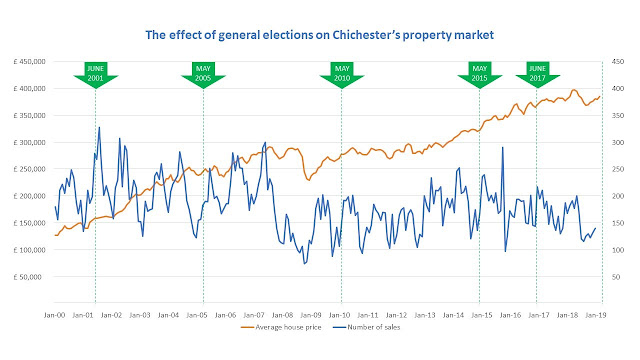 The fact the Conservatives have since introduced spurious tax changes against landlords, which will ultimately lead to an increase in rents for tenants, may be a factor as to who landlords in particular might be voting for come election day. Unfortunately for landlords, the other parties plans show little sympathy towards them either nor, in my opinion, any logical thinking towards the growing private rented sector.

Its interesting to note that house prices nationally have risen at a similar pace over the last fifty years, regardless of which party is in power. My calculations suggest the Conservatives have the slight edge here, having overseen an average increase of 14.4% for each of the 31 years theyve been in power. This compares to a slightly lower 13.7% average increase for each of the Labour partys 19 years.

It wont surprise many of you that Tony Blair resided over the biggest boom in house prices of any British Prime Minister since data began. Under his premiership from 1997 to 2007, average UK property prices increased 211%.

Gordon Brown remains the only Prime Minister to have seen house prices fall during their time in the hot seat, with a 7.2% drop during his premiership between 2007 and 2010. Should Boris stay at Number 10 come to an abrupt end on 12th December though he too may share this unfortunate distinction, as house prices are hovering around the same level as they were when he took over just five months ago.