How will Alice, Arthur and Jack afford a home in Chichester?

If you’re wondering who Arthur, Jack and Alice are, well they were the most popular baby names here in Chichester in 2018 - with 13 baby boys named Arthur and Jack and 8 baby girls named Alice. It’s nice to see Chichester’s new parents using their imagination a little, largely avoiding the most popular names in the UK; Jack was 5th and Arthur was 7th amongst the boys, whilst Alice was 24th amongst the girls.

What many of Chichester’s new parents will have in common though is the worry over how their new-borns will be able to afford a home in Chichester when the time comes. There’s two major sticking points when it comes to this - availability and affordability.

I’m often asked who’s going to buy all the new homes that are due to be built in and around Chichester; 300 in Westhampnett, 600 in Shopwhyke/Oving, 1,000 in Tangmere and 1,600 at Whitehouse Farm, to name just a few developments. Well, with 991 births in Chichester being registered in 2018, there are a lot of new humans who will one day want a home of their own.

With life expectancy increasing too, the overall population is rapidly growing - an additional 734 people were recorded as living in the Chichester district each year on average between 2001 and 2011. Meanwhile, despite some assuming the opposite due to the ongoing developments, there have been far fewer homes than this built in the area.

Already we can see the effects of this on the property market, with a lower amount of stock available and fewer homes being sold in Chichester. Unfortunately for the youngsters of today, this has helped buoy property prices, which remain stubbornly high here in Chichester.

I’ve written numerous times about the lack of affordability for local people when it comes to Chichester’s property prices. The average property price in Chichester stands at £373,648, which is 13 times the local average salary of £28,271 and puts them amongst the most expensive in the country. Even those who earn enough to afford a home will still need to come up with the money for the deposit (around 10%) and other costs associated with buying their own home. 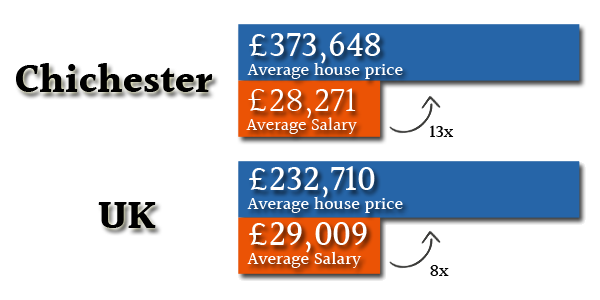 Clearly this is restricting home ownership in Chichester, particularly amongst younger people. It is why I believe demand for rental property in Chichester is likely to remain high and landlords therefore have a duty to serve the community with safe and well-presented homes. Unless significant numbers of new homes are built quickly, or lending criteria softens, this situation is unlikely to change.