Shortage of homes to rent leads to tenant bidding wars

This was the title of a recent BBC News article, which seems to have come as a surprise to many. Rents have increased by 10.6% on average in the past 12 months across the UK. Who could have possibly anticipated that all of the government's meddling would negatively impact those it was supposed to help (i.e. tenants).
Maybe they should read my newsletter!....
In December 2015, when the stamp duty surcharge to landlords was announced, I wrote:
The tax changes announced in the Summer budget and now the additional 3% stamp duty to new buy-to-let properties will reduce investment in rental properties. There is already a shortage of rental properties on the market and the new legislation will further limit the options available to tenants, which will ultimately increase rents.
In April 2017, when section 24 tax changes first took effect, I wrote:
"The impact of all this is likely to translate into some landlords selling up, alongside fewer people entering the market. The resulting drop in the supply of rental properties, coupled with landlords needing to earn more to make the venture worthwhile, suggests rents are likely to increase."
A couple of months later in June 2017, when a ban on fees to tenants was announced, I wrote:
"I believe the letting fees ban will lead to rents rising; meaning any short-term savings for tenants will be more than offset by the monthly increase in rent. Perversely this will penalise those tenants wanting to create a long-term home the most, which is something I thought the government was in favour of?"
In February 2019, when the previously announced tax changes started to bite harder, I wrote:
"Some landlords are already exiting the market as theyve calculated it just isnt worth it for them anymore. Whilst that may create some opportunities for people looking to buy, it will mean a further reduction in the number of properties available to rent and, as a consequence, an increase in rents for those that remain."
In June 2019, when the other stuff bolted on to the Tenant Fees Act was better understood, I wrote:
Security deposits will be capped at five-weeks rent (for rents up to £50,000pa). Whereas tenants with credit issues, who are self-employed (with income thats hard to prove) or with pets used to be welcomed simply by asking for an increased security deposit, now this is not an option. Instead, many will be rejected outright and will thus find renting a home even more difficult than it already is. They may alternatively be asked to pay an enhanced rent (which is allowable under the guidance of the Act).
as well as:
Unfortunately, I believe these changes will lead landlords to be pickier than ever as to who is allowed in their properties, as well as being less flexible (and perhaps less helpful) than they were before the Act came into force.
The renters reform bill has now started to take shape; so, do I think it will ultimately prove to be good news for tenants? In a wordno.
The problem with all of the governments meddling and the theory that good landlords should not be worried about the changes, is that the good landlords (and letting agents) are the ones burdened by trying to do things right. This can become an onerous task, to which many decide the easiest solution is simply to exit the market. Meanwhile, the rogue landlords will continue to ignore or sidestep the rules like they always have. I believe this will ultimately lead to a drop in the supply of rental homes, which will lead to a rise in rents, alongside a decrease in the quality of the operators who remain in the industry. 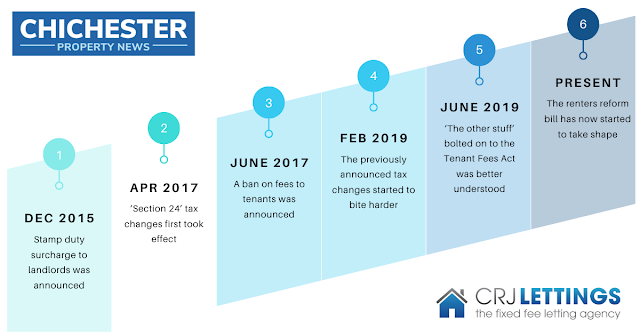 Or why not subscribe to the weekly Chichester Property News e-newsletter at www.bitly/chipropertynews