Which is Chichesters cheapest street?

Having looked at where the most expensive streets in and around Chichester were last week, I was asked by one reader which the cheapest street in Chichester is. Normally I dont look at this as it can come across as a little negative towards the occupants of that street (not that thats necessarily the case) but I shall, as they say, give them what they want.

There are also a few reasons why profiling the cheapest streets doesnt necessarily work. The most obvious is where a street is predominantly made up of flats rather than houses, which will naturally be cheaper. For instance, St. Cyriacs in the heart of Chichesters city centre makes the top five on account of it being made up nearly exclusively of one-bedroom flats (at an average value of £170,000, which isnt exactly cheap!). Mobile homes also create the same affect, particularly when you expand the search to include Selsey and the Witterings, rather than focusing solely on the PO19 postcode area.

Another reason the data can be skewed (and I have to use a little local knowledge to filter through it) is a more recent phenomenon - properties sold under shared ownership. You see, according to Zoopla the cheapest street in Chichester is Silverlock Close, which is a newer part of the Swanfield estate. The £119,000 average value in this row of two and three bedroom houses seem like a steal; until you realise they were sold as 50% shared ownership and thus their true value is actually double this figure.

So, whats really the cheapest street in Chichester when you filter all this out? Well, in the PO19 postcode area that would be Lennox Road, with an average value of £152,000. The 81 properties in Lennox Road are all flats, most of which are rented out socially or from the council. 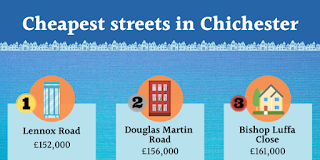 In second place is Douglas Martin Road; another street located on the doorstep of St. Richards Hospital, which again is predominantly made up of flats. Each of the 26 homes here have an average value of £156,000. And in third place we move across to Parklands, where Bishop Luffa Closes homes have an average value of £161,000. Considering it is positioned right next to some of the best regarded schools in the area, this makes one of its 65 properties attractive when it comes to their school catchment area.

When you compare this to last weeks article, when I was writing about a home worth in excess of £5m, it just goes to show what a vast difference in wealth there is in Chichester, despite it being a relatively small city.