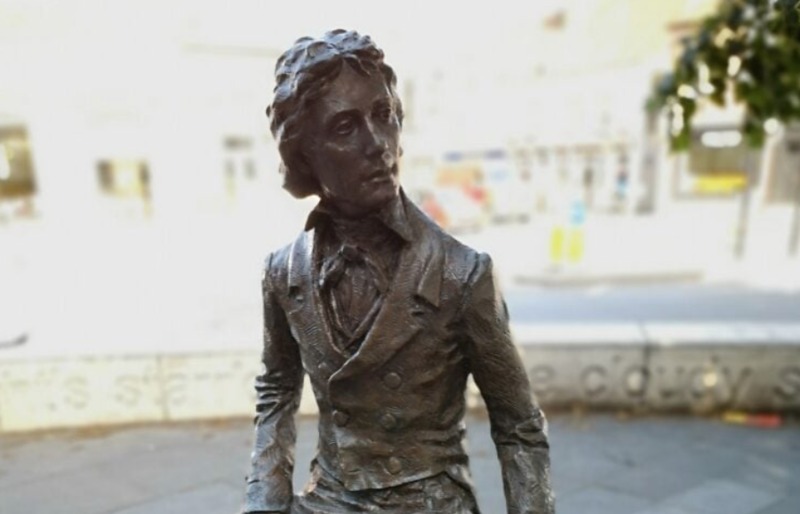 200 years ago this month on the 23rd February 1821 John Keats died of TB at the tragically young age of 25. Online events throughout the world are celebrating the life of this most beloved Romantic poet.

The fact that he was born and lived for much of his life in London and that he died and is buried in Rome is well documented. But what is the connection with Chichester? It was whilst staying with a friend in Chichester in 1819 that he was inspired to write his poem “The Eve of St Agnes” which has been hailed by many as one of his best works.

Here is the story told by Hilly Sloan, the History Guide:

While staying in Chichester, Keats began to write ‘The Eve of St Agnes’, a poem which tells the story of young lovers driven apart by feuding families. True to the legend Madeline, Keats’ young innocent heroine goes to bed on the Eve of St Agnes silent and supperless, keeping her eyes upon Heaven, hoping to dream of her future husband. It seems likely that the medieval architecture of Chichester inspired Keats to write of a great hall and house where Madeline lived! In a letter Keats wrote to his brother George, he describes invitations to card parties with ‘old dowagers’ in the City. One of these parties was probably thrown by a Mrs Mary Lacy who lived in an ancient building that was once the City Guildhall dating as far back as the 12th Century. In 1394 Richard II had granted it to Bishop Mitford for use as the Vicars Hall for dining and recreation. We know that Mrs Lacy’s rooms overlooking South Street at the east end of the Vicars Hall, were directly above the huge vaulted cellar, now known as the Crypt. Since 1661 the landlord of the The White Horse Inn opposite, on the east side of South Street had leased the vaults to store his wine and there were reports that in 1686 one of the vicars complained that pigs were being kept there too!

In 2019, the 200th anniversary of this event a statue by local sculptor Vincent Gray was unveiled by Dame Patricia Routledge in Eastgate Square.

Follow the link to BBC Sounds - Stripping away old myths, this series provides a vibrant new portrait of John Keats as a doctor and poet, 200 years after his death and in view of all we have learned in the Covid era.