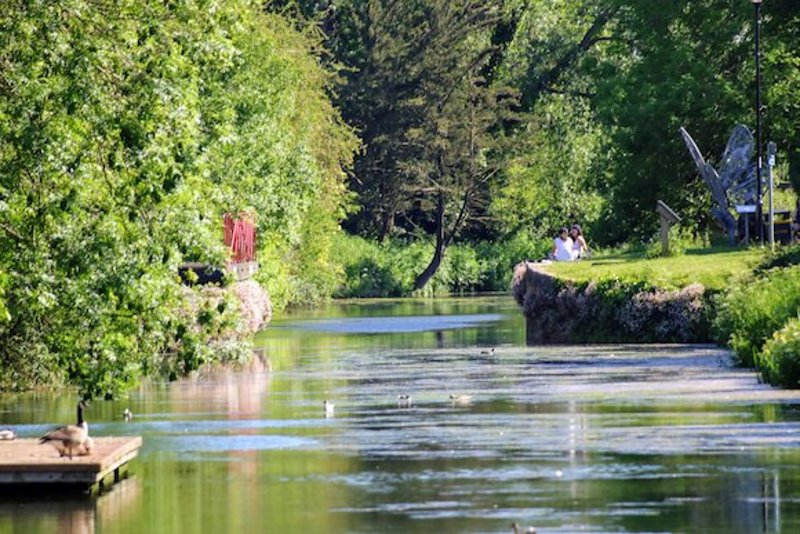 John Rennie’s plan for the Portsmouth & Arundel Canal, of which the Chichester Canal formed a part, became an Act of Parliament in 1817, and the Company of Proprietors of the Portsmouth and Arundel Navigation was set up.The Chair was Rear Admiral Peter Halkett. The Committee included the 3rd Earl of Egremont, an enthusiast for canal building. He had shares in the Arun Navigation Company, and the Wey and Arun Junction Canal. The rest of the Committee consisted of noblemen, landowners, attorneys, and farmers, not businessmen and certainly not, unlike Egremont, men experienced in canal building.

The Act empowered the proprietors to sell shares to raise £126,000. At the first meeting, £101,250 had already been pledged. Once again the Earl of Egremont was the principal shareholder. In addition, two government loans, totalling £40,000 were taken out under the Poor Employment Act. These loans were guaranteed by the Earl who repaid the first yearly instalment of £2000 out of his own pocket.

Before engaging contractors a resident engineer had to be appointed. Chief engineers, like Rennie, had little to do with the work after the planning stage. A resident engineer’s job was to superintend the work, to suggest improvements, and to be responsible for purchasing timber, ironwork etc. They advised the management on the progress of the works. James Hollinsworth was appointed in July 1818. Hollinsworth had experience in canal building, but his past record was uneven. In 1785 he worked on the Grand Junction Canal where he was reprimanded for negligence when failing to supervise the work to straighten Braunston Tunnel. In 1798, when he was employed on the Kennet and Avon Canal, there was a move to arrest him for false accounting.

In August 1818 Dyson and Thornton were contracted to do the digging, but only for part of the works. In particular the Basin at Chichester was excluded. Digging commenced later that month at Ford on the River Arun.

The construction was a vast task. Although the land was relatively flat and the engineering work straightforward there was still considerable cutting, excavation and puddling (lining the base and sides of a canal with wet clay to prevent leakages) to be done. Six brickworks were established to supply building material for two basins, six locks, 17 bridges, abutments for 21 swivel bridges and 22 culverts. Two pumping engines were to be built, at Ford and Milton. There were also cottages to be built for the keepers of locks and swing bridges. The hardest work was dredging the channel from Birdham through Chichester Harbour and around Thorney and Hayling Islands.

The first turf was cut at Ford on 20 August 1818 by John Williams, the Clerk to the Committee, and one of the most enthusiastic promoters of the Canal, and two weeks later digging began in earnest at Merston. Work proceeded swiftly at first. By November works were ongoing at seven different sites and the first bridge had been completed. By summer of 1819 two bridges were completed and four more were in progress.

On the Portsmouth section a change was proposed to the design. The war with France was over. Previously the Admiralty had opposed using the Portsbridge Creek to gain access to Portsmouth Harbour because of the threat to defences. It was for this reason that Rennie had proposed the Cosham Cut to the north of the defences. The Company asked the Admiralty to be allowed to deepen the Creek and so avoid building the Cosham Cut. They agreed and the Board of Ordnance saw some advantages for themselves. Rennie saw no problems provided that a lock was built at the Langstone Harbour end to regulate water levels.

The Chichester Corporation wanted to use the Canal to allow sea-going vessels of 100 tons to reach the city from Chichester Harbour. The Company agreed to widen and deepen the Canal from Birdham to Hunston and from Hunston to Chichester. They also agreed to build a new road from Southgate Basin to the city, originally Canal Road, now Basin Road. In May 1819 a decision was made to increase the depth of the Portsea Canal from 5 feet to 12 feet.

In August 1819 the steam engine at Ford began pumping water into the Canal. By March 1820 enough water had reached Yapton to enable boats to carry away the spoil from the digging to build the embankment over the valley at Denges Barn.

The bridge at Hunston Common was causing trouble. As it stood on low ground the approaches had to be built up with earth from the excavations at Donnington. The sea lock at Salterns was half built, the Basin at Halfway Houses in Portsea was nearly excavated and much of the basin walls built, but lack of bricks had delayed the progress at the engine house in Milton. The Milton steam engine had its first trial in October 1820, when enough water was raised to fill the channel to a depth of 3 feet over three quarters of a mile.

C.H.Tickell of Southampton were contracted to construct the 21 iron swivel bridges, built in 1820 and all named after landowners or supporters of the project.

Hollinsworth’s contract may not have been extended after December 1820. In May 1821 the contractors employed sub-contractors for specified works, working to strict deadlines, which often meant double shifts and night working. It was hoped that the whole line would be completed in 40 weeks. But problems continued. A year later, in May 1822, the Navigation was still unfinished. Works at Barnham and Bersted valleys needed more time. On the plus side the bridges were all in place and the Ford and Milton pump houses completed.

In December 1821 the Company gave up the idea of deepening Thorney Channel, and chose to deepen the Langstone Channel, north of Hayling Island, only, cutting through the wadeway crossing to the island from the mainland available at low tide.By cutting through it the crossing would be lost and a bridge needed. They commenced building a bridge but eventually allowed another company to build it, contributing £3080 to the cost. This bridge was an improvement on the Company’s proposal as it crossed the whole channel, not just the wadeway.

Although much of the Canal was still incomplete the Company went ahead with the first opening ceremony in April 1822.